The CBC Health Board’s Prevention of Mother to Child Transmission (PMTCT) of HIV project has continued to initiate HIV positive pregnant women into anti-retroviral therapy. More and more women who test HIV positive in pregnancy are put on treatment to prevent the virus from being transmitted to their babies. In this way treatment uptake by pregnant women has continued to rise. Treatment efficacy-testimonies abound with the final outcome being HIV Free babies.

Their names are Jerry, Praises and Jenny-HIV Exposed Infants (triplets) born of an HIV positive mother in the Northwest region of Cameroon. Their case study is one of many successful interventions by the PMTCT project leading to HIV free babies. All the children have been followed up with good records of the children maintaining a negative status during rapid test at 18 months.

Eliza is 24 years old and mother of 7 children after 5 births. She was diagnosed HIV  positive in 2006 and immediately initiated to treatment. This diagnosis however almost destabilized her:-

“If I didn’t die at that time it is thanks to God. I had heard that HIV kills and so Eliza’s story shows the importance of knowing our HIV status and accepting and I thought that was the end of my life”

Thanks to continued counseling, she informed her husband about her status and with HIV who have opened up to share their testimonies to enable others emulate for started taking Bactrim treatment. Her adherence to treatment and positive mind-set enabled Eliza to bear all her 7 HIV negative children within ten years since she knew of her positive status.

Though Eliza lives in one of the remotest areas of the NW region, she knows the importance of early Antenatal clinic during pregnancy thanks to the sensitization messages of the HIV-Free project in her community. In her last birth in which she bore triplets, this young mother started antenatal clinic at three months. During her pregnancy, she was switched to Option B+, a regimen she appreciates for its convenience. This led to proper follow up to guarantee the good health of the babies whose first cries were heard on January 5, 2016.

Eliza prides in sharing her childbirth ordeal. Her labor pains started at home, about 12 kilometers from the health center. Carried on a bike, she could not hold it until the hospital. Her triplets were delivered on the way with the the assistance of the bike rider and a passerby. 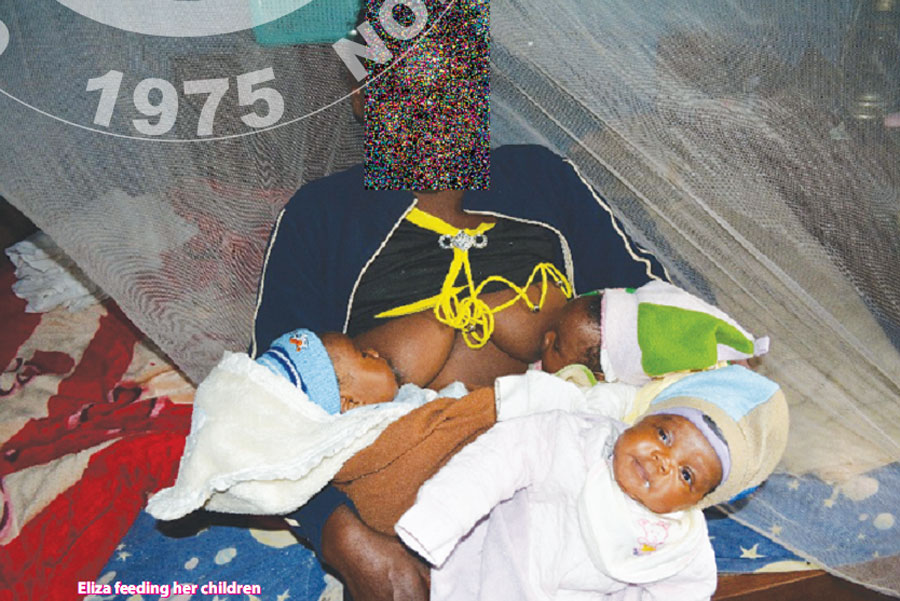