Strategically surrounded by Baleng, Bamegoum, Badeng and Banefo villages is the Bapi community where the Bapi Primary Health Center is established. The Bapi community in the West Region of Cameroon, home to the venerated Ma Tsobe Madeleine, a leprosy survivor treated at Mbingo Baptist Hospital many decades ago, has been experiencing unprecedented development strides in the recent years. Ma Tsobe, as she is fondly called by community members spent many years in Mbingo Baptist Hospital and later returned to Bapi to lay a path to the fast growth the community is experiencing today. 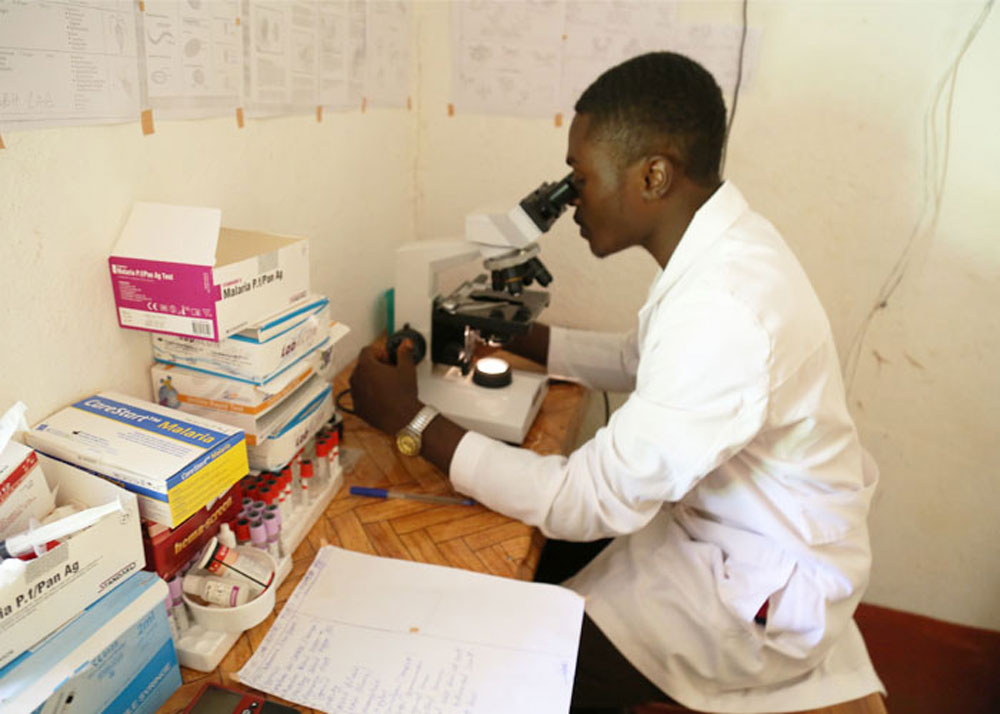 Community members, who now think of her as a pathfinder for the development of Bapi, attest that her stay in Mbingo had a deep impact on her. Unlike other patients treated of leprosy at the hospital who become permanent residents of the locality, Ma Tsobe chose to return to her community to instill the way of life she learned while on treatment. As a good ambassador, Ma Tsobe visited her village chief to share her vision of a prosperous Bapi that will pass through the establishment of a church, a school and a health centre.

She started moving around the village square singing and preaching the word of God to the villagers. Not deterred by her stumped limbs, Ma Tsobe will gather as much people as she could to pass her message across. Seduced by her futuristic vision, the chief of Bapi allocated her a piece of land in the outskirts of the village to start her development work on. Other community members emulated the example of the chief and increased the land, so that it could carry all the structures Ma Tsobe had in gestation.

The first Baptist church of the West Region was erected on the said piece of land in 1975. Her passion for the welfare of her community pushed her to pioneer the construction of a school on the same piece of land some years later. The school now serves as residence for the staff of Bapi PHC through community participation.

Her experience being a stigmatized leprosy patient at the time, and her eventual treatment didn’t deter her from pursuing her dream of ensuring that her community had a taste of what God had done in her life through the Mbingo Baptist Hospital. Today, the quarter in which the church and the health centre are located teem with life, evidence of what community members term prophecies of Ma Tsobe.

Determined to see her dream come to fruition in her lifetime, Ma Tsobe wrote to the CBC Health Board requesting for the creation of a PHC in Bapi. As a result of her persistence, Bapi Baptist Primary HC was created in 1985, five years after the start of the LAP programme of the CBC Health Board.

Today, Ma Tsobe’s dream of seeing her community members benefit from quality health services is gradually being realized. Over the years, Bapi PHC has had a long trail of success stories that can be credited to the revamping of the Village Health Committee, and the community involvement in the life of the PHC.

The PHC is currently engaged in constructing a modern maternity and patient ward. The ongoing project is another evidence of quality service being the catalyst of development. The project is being sponsored by the local elite, Mr. Kengni Kout Levis, in recognition of the good services the PHC provided to his aunt. As the story goes, Mr. Kout’s aunt was almost unable to walk as a result of a painful condition in her knees. She had gone to several hospitals to no avail. Finally she came to the PHC. After a few injections, she could move on her own. Amazed by the “miracle”, she called her nephew to share the good news with him. Not believing the report, he travelled to the village to see her live.

It is worth mentioning that Mr. Kout was also afflicted by the same condition and could no longer drive himself. On seeing his aunt walk as swift as she had not done in the past five years, Mr. Kout decided to consult at the PHC. His case was as well resolved. During the time he was undergoing treatment, he had observed that when the one room ward is full, patients were admitted on mattresses on the corridor. After his recovery, he met Mr. Wandoum François, a dynamic member of the Village Health Committee to know what he could do to improve the PHC.

“That day, he consulted me and asked me what he could do for the PHC. He promised to construct a modern ward for the PHC. The following day, the land was allocated, the estimate given and the project on the construction of the new modern ward is currently being constructed,” expounded Mr. Wandoum with a smile.

The strides recorded have not ended, more and more people in the community continue to enjoy and willingly donate services to ensure that Bapi PHC blossoms. Mr. Francois Wandoum, the youngest member of the village health committee and head of the construction project has constructed a bore hole that supplies water to the health centre and the community at large.

Mr. Wandoum himself became an ardent developer of the PHC as a result of a successful treatment. “I used to live in Yaoundé as a building contractor. I fell ill in 2017. I went round hospitals in the capital city of my country to no avail. I was finally transported to the village to try the traditional healers and die closer to my folk. My father took my consultation card to the PHC during a doctor support visit because I could not move unaided. That same day, my illness was diagnosed. I was referred to Mbingo Baptist Hospital for proper management. There I had a surgery and from then, I have been very healthy,” he explained with a glow in his eyes.

Stories like these have inspired community involvement, participation and ownership of the facility. In this line, many community members have added a portion of their plots to the PHC and the church. The chairman of the village health committee, Mr. Wandom Jean, explains that he supplies the PHC with electricity for work to be done easily.

“The people of Bapi are hungry for more from the CBC Health Services. We are doing all we can to ensure that this facility grows fast to one day become a hospital. We have the will to work as a community to ensure that the health facility stands the test of time. But we cannot do this alone. That is why I am calling on the CBC Health Services’ administration to come hold our hands lets together enhance the work we have been doing here,” he pleaded.

The Chief of Centre, Mr. Kilih Gamaliel Ngong, an Advanced Practice Nurse Assistant and LAP Field Supervisor explains that the health facility is experiencing great progress since he took over leadership in September 2018 and this is thanks to community collaboration, participation and patronization of the facility.

“The number of patients who turn up with ailments has increased greatly. We see between 180 to 200 patients monthly and community members testify of the great job we do here. We conduct deliveries, general consultation, antenatal clinic, run a pharmacy and a laboratory. The commonest illnesses diagnosed in the facility are epilepsy, STDs especially gonorrhea, malaria, amongst others.

Mr. Ngum Palice is Field Supervisor of PHCs in the West Region. He explains that “The level of community involvement and participation in the affairs of Bapi Primary Health Center is promising. The recent developmental projects carried out at the PHC attest to this. The CBCHS has recently sent some PHC nurses who are doing a marvelous job in this facility. However, I am calling on the authority to send more trained staff to meet the increasing demand for quality healthcare services in this facility.”

Madam Massop Rachel and Magoum Sara are Bapi community inhabitants and former workers of Bapi PHC. They explain that compared to when the facility began, there has been great progress in terms of patient turnout, community participation, infrastructure, service delivery and staff capacity. They, however, expressed the need for more trained staff and paraphernalia that will enhance the work being done.