Some nine village health workers otherwise called, health promoters have completed the basic course and received attestations to enable them provide primary health care services in their communities. The graduation of the 38th batch of LAP promoters took place on March 1, 2019 at Allat Integrated Health Center in the Adamawa region. Our LAP correspondent, Godlove Tabah reports that the training held far away from the usual place of training at the Life Abundant Primary Healthcare (LAP) facility in Bamkikai owing to the socio political crises rocking the North West and South West regions since November 2016.

LAP Spiritual Supervisor, Pastor Ringwi Joseph represented the LAP Administrator at the graduation ceremony, which took place under the watchful eyes of the Administrator of Baptist Hospital Banyo, the Chief of Center of Allat Baptist Health Centre and the CBC Field Pastor of Mayo Darley among others.

The dignitaries took turns to encourage the students to bring about a positive change in their various communities which should result in the reduction of morbidity and mortality especially amongst the vulnerable such as the under five children, pregnant women and the elderly. The students were also encouraged to know their limit and uphold their professional ethics while remaining current by studying consistently. The LAP Administrator’s representative also appreciated the facilitators for the knowledge impacted on the students.

The LAP Promoters basic training took place for 8 weeks during which the student were trained on reporting, teaching, diagnoses, treatment and referrals to IHCs and hospital for better management. 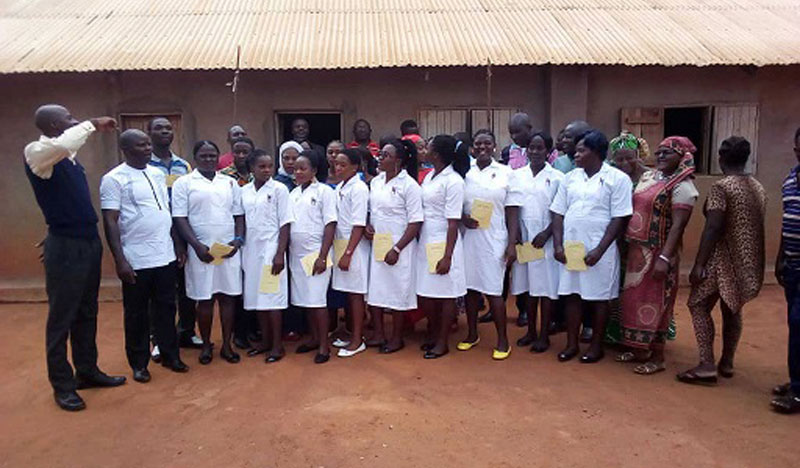 The communities to benefit from the services of the 9 promoters are Nkfui, Piyning, Mboungam,  Bapi, Bamukumbit, Kurt, Tibati, Mbah. The graduating student promised to put the knowledge acquired to practice in their different communities.