Participants at the 9th Biennial Conference of the Africa Christian Health Association Platform (ACHAP) have recognized and celebrated their contributions and role as co-creators and champions of Primary Health Care (PHC) in Africa. In spite of the journey covered so far, ACHAP says much still needs to be done to achieve Universal Health Coverage (UHC).

They came from twenty Sub-Sahara African countries to converge at Mont Febe Hotel Yaounde, Cameroon from February 25 to March 1, 2019 under the theme, “Re-igniting Primary Health Care: The Role of ACHAP” with the Cameroon Baptist Convention Health Services (CBCHS) as host.

In his welcome address, the Director of Health Services (DHS), Prof. Tih Pius Muffih thanked ACHAP for choosing Cameroon to host the biennial conference of 2019. He presented his organization, which became a member of ACHAP in 2015. The Cameroon Baptist Convention (CBC) Health Services, Prof. Tih said,

“The CBC Health Services is the leading health care provider in Cameroon operating 7 tertiary hospitals, 30 Integrated Health Centers, 52 Primary Health Centers, a pharmaceutical procurement, production  and distribution unit, a robust HIV and AIDS and prevention program, Training Schools for Health Personnel, residency programs for surgeons and internal medicines, a Center for Clinical Pastoral Education and a comprehensive program that addresses the health and socio-economic needs of persons with disabilities,” Explained the health expert.

He used the opportunity to announce that the CBC Health Services recently received government authorization for an Institute of Health Sciences.

On this premise, the DHS hailed the conference theme as timely for two reasons: firstly, the conference was holding on the heels of the commemoration of the Alma Ata Declaration that took place in 2018 during which similar calls were made for governments to re-ignite PHC and secondly, the theme comes at a time when Cameroon is working towards Universal Health Coverage within a 10-year strategic plan (2017-2026).

Prof. Tih also lamented that government subventions have not been available to Faith Based Organizations (FBOs), at least in Cameroon, despite the huge contributions in implementing government health priorities. He said faith based health systems have not only spearheaded innovative strategies to offer quality care at the grassroots, but also have used the limited resources in an accountable manner to reach more populations.

“To implement PHC for UHC, governments of countries of Africa must not ignore the role of FBOs. I urge the Ministries of Health in various countries to partner with experienced FBOs towards Universal Health Coverage,” Encouraged the public health expert. 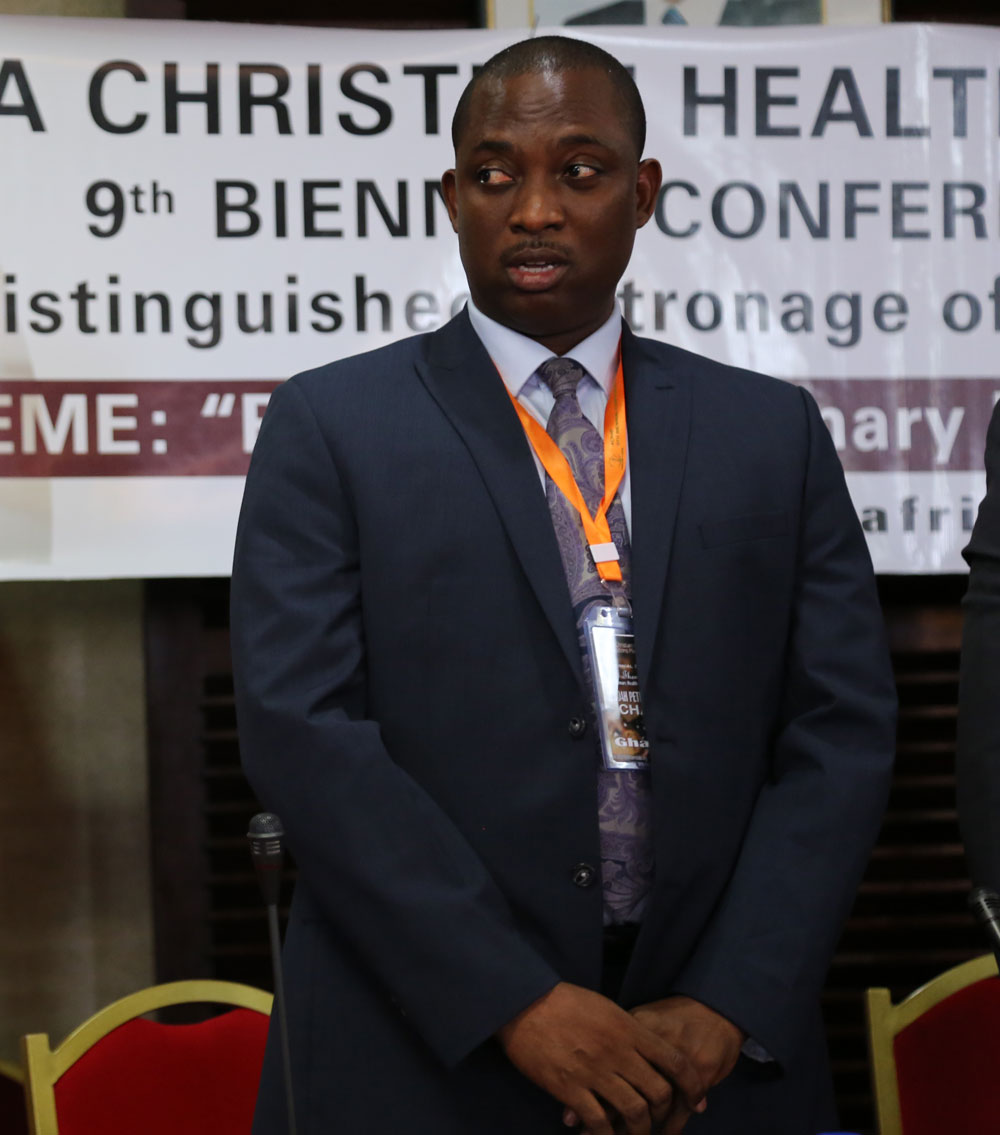 Ghanaian born, Mr. Peter Yeboah, Chairman of the Africa Christian Health Association Platform (ACHAP) took the discussion further in his keynote address. He traced the foundation of ACHAP to the 1970s inspired by Christ’s healing ministry to work and advocate for health for all guided by the principles and values of equity, justice and human dignity.

Although the global health have undergone rapid transformation over the past two decades, Mr. Peter Yeboah noted that the contrast is so striking in Sub-Sahara Africa where communicable, maternal, nutritional, and newborn diseases continue to dominate, and still remain the top drivers of health loss, especially in lower-income countries.

In the context of re-igniting primary health care and universal health coverage in connection to the Conference theme, the ACHAP chairman challenged participants to go beyond imperatives and ideals to the need for reality checks.

“Our primary health care is underdeveloped and underfunded in many countries, and facing a severe workforce recruitment and retention and systematic challenges. Amidst these challenges, there is fragmentation, duplication and inefficiencies in our fragile health systems undermining progress”.

As co-creators, historic champions, advocates and staunch supporters of PHC and UHC, Mr. Peter Yeboah said ACHAP has a sacred role and moral responsibility to bring the PHC vision forward.

The timid presence of the Government of Cameroon and the WHO at the ACHAP Conference were felt by the representatives of the Minister of Public Health and that of the Governor of the Center region. Mrs. Onguele Aurelie, Chief of Service in-charge of National Partnerships, in lieu of the Minister of Public Health, expressed the honour of the Government of Cameroon to host the 9th Biennial Conference of ACHAP. The government representative highlighted and appreciated the fact that Faith Based Organizations (FBOs) serve 40 percent of the population of Cameroon.

The Minister’s representative reiterated government’s role to support FBOs in overcoming their principal weaknesses in the provision of health care.  She challenged the Christian Health Association participants to redouble efforts in sensitizing and educating the communities on basic primary health care options. She urged ACHAP to work in synergy in sharing ideas and experiences in surmounting their challenges.

A total of 4 workshops held with several break-out sessions and panel discussions to elucidate and shed more light on the conference theme, “Re-igniting Primary Health Care: The Role of ACHAP”. The participants visited two Faith Based facilities at Etoug-Ebe Baptist Hospital Yaounde and the Presbyterian Health Center Nsimeyong to observe how health care is dispensed in Cameroon.

Rev. Nditemeh Chalemagne, Yaounde Field Pastor and representative of the Cameroon Baptist Convention (CBC) Executive President at the ACHAP Conference and the Rt. Rev. Fonki Samuel, Moderator of the Presbyterian Church in Cameroon (PCC) held Conference participants spellbound in their thought provoking devotionals. The church leaders were unanimous that African problems require African solutions. “Africa will remain poor if we Africans cannot change it,” they insinuated. They hailed the ACHAP initiative but tasked them not to rest on their past achievements than to do more in providing health care to African communities that is still rural and in dire need of primary health care, which is preventive and cheaper than curative care and treatment that are expensive.

Drawing inspiration from Jeremiah 8:32, Rt. Rev. Fonki Samuel lamented on the plight of Africa under the topic, “Is there no Cure in the Continent of Africa?” He wondered aloud why Africa, 50 years later, is still a complaining continent plagued by war, diseases such as HIV and Ebola, dwindling economy, starvation, genocide, suffering from all forms of depravation, poorest of the poor and still lagging behind in basic quality health care. “Why is it so hard for the highly qualified personnel we have in Africa to comply to basic health care practices,” he interrogated. The PCC Moderator who doubles as CEPCA President prayed that ACHAP 2019 will truly ignite primary health care in Africa. The Choir of PCC Nsimeyong graced the event with melodious renditions.

The 9th Biennial Conference of the Africa Christian Health Association Platform (ACHAP) rose with the following take-home messages read out by Dr. Mwai Makoka from the World Council of Churches:

ACHAP signed Memorandum of Understanding (MOU) with two partner organizations namely, World Vision and American Leprosy Mission. The last ACHAP Conference held in Lesotho in 2017 and the next one will hold in a country still to be decided by the ACHAP Board.

In his capacity as host, the CBC Director of Health Services, Prof. Tih Pius Muffih appreciated the leadership of ACHAP for choosing the right theme and the right people to handle the topics under review. In this regard, he encouraged participants to move away from curative care, which is expensive for the average African to prevention, which is cheaper and affordable to all. He prescribed that people should adopt healthy lifestyles, and the populations should be educated to adopt good and healthy practices. Prof. Tih challenged ACHAP 2019 participants to follow up and implement the resolutions as the only means of igniting primary health care in Africa.