Dr. Lubeka Nina, Resident at the Christian Internal Medicine Specialization (CIMS) Programme has retraced the motivation for picking up a career in medicine to the exemplary care she received at Banso Baptist Hospital (BBH) way back in 1999.

“I was involved in a road traffic accident in 1999. Due to the popularity that BBH had gained and has maintained till date, I was rushed there. During the three months that I was hospitalized for multiple fractures, the nurses took good care of me.  It was during that period that I drew close to Christ due to the daily devotions from chaplains,” the medic narrates her true life story.

During a visit to BBH, Dr. Lubeka shared her story to our BBH based reporter, Amos Wirngo, this time around not for medical attention as was the case in 1999, but, as an Internist for practicum. When I look at the way I was being cared for, the nursing care and doctors around gave me an inspiration to one day be in a position to carter for the sick too. “So I would say I was inspired to be a medical doctor [here] from then,” she said.

Lubeka Nina had just been promoted to primary five back then when the accident and subsequent hospitalization brought her close to her dream career. After being discharged I continued schooling, completed my elementary education, and gained admission into secondary and high school where I spent seven years, recounted Nina 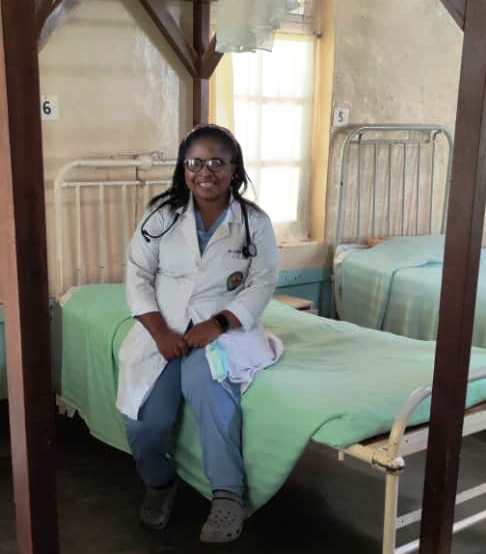 Seated on the bed where she was admitted two decades and more years ago at the BBH Children’s Ward with broad smiles on, Dr. Lubeka says behold after high school, I wrote the entrance into the School of Medicines of the Faculty of Health Sciences of the University of Buea where I trained for seven years. Shortly after graduating, I heard of the Residency Programme for the training of Internists at Mbingo Baptist Hospital, applied and was taken.

“I am glad that God worked it out this way, that the same health system where I was treated and inspired to be a medic, is the system I am starting my career in,” enunciated Dr. Lubeka with a toothy smile on.

My training at CIMS has been going on well and when Dr. Julie Stone, Faculty said she was coming to BBH and I was to accompany her, I was so happy. To me, it was a dream come true that I will give a helping hand where I was once helped, she said.

Being here today is longing fulfilled. The first day I touched base at BBH, I visited the Children’s Ward and immediately spotted my bed where I was hospitalized for over three months and was so happy. I want to appreciate the staff of BBH, though most of you were not here at the time, I know the good work has been handed like a relay baton to you. Thank you for having, she added.

Editorial: The Relevance of CBCHS’ Mission and Vision