My cherished culture is becoming a stumbling block

Salamatou, 20 years old was the 8th wife to a notable in her community. She hails from a Muslim community in Massangam, a subdivision in the Noun, West Region, Cameroon. The Noun covers 52% of the land surface in the western region, with a surface area of 7687KM and a population density of 455,083 as of the 2005 demographic survey. Most inhabitants in the Noun Division, identify themselves as Bamouns.

Celebrated for its cultural diversity and heritage; the Bamouns venerate their sultan and have made arts and craft a backbone of their economy. Its emblem of a serpent with two heads is one of the several touristic sites which has attracted people from far and near. People from all walks of life with different religious backgrounds. It is one of those communities that depicts the true Cameroonian parlance of “vivre assemble” as Christians, Muslims and Traditionalist, live in perfect harmony without interfering in the culture of one another. While the aroma of this amalgamation makes the strength of the Noun Division, a group of people in this community feel left out. 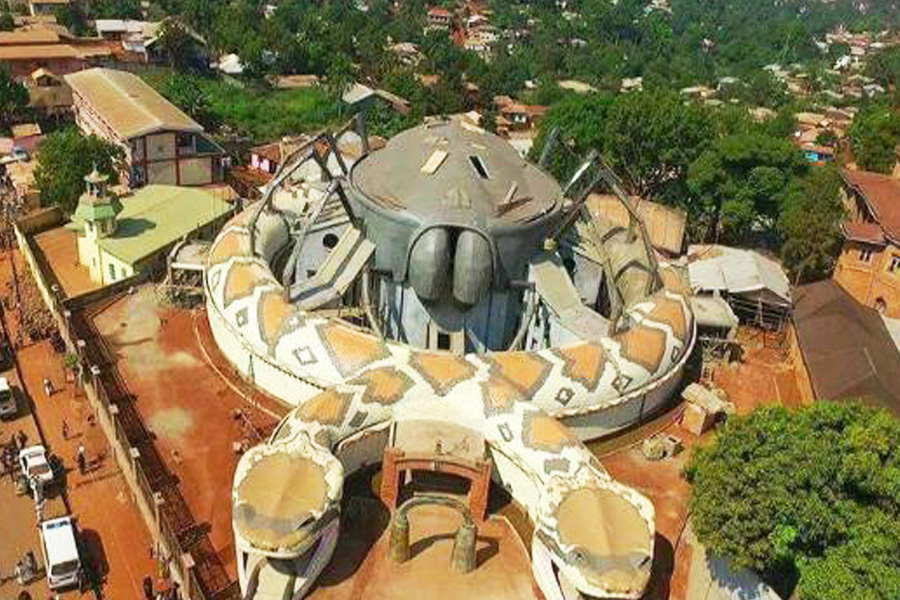 Like most young girls in the Bamoun community, salamoutou was betrothed to her husband at the age of 10 and finally moved to his house when she turned 15. She was lucky to have a husband who waited for her to complete her primary school certificate. Some girls in her community don’t have that privilege to finish primary school before getting married.

“It is a privilege for a parent to married out their daughter when they are still a virgin, besides men prefer them young because they are obedient, submissive and respectful at that age” explained Aisha a 31-year-old mother who just saw her 15 years old daughters off for marriage. Asked if she felt it was a good practice, Aisha responded flatly. “It’s our culture, I got married when I was 13 and I learned to love my husband. My daughter is lucky, she is the 2nd wife to her 38-year-old husband. I was the 9th wife to my 57-year-old husband”

Early marriage is part and parcel of the Bamoun culture which is highly celebrated in the communities. Almost every Saturday, parades of vehicles celebrating newlyweds can be seen across the streets of Foumban. With 60% of these marriages recognized traditionally, about 40% of the couples take the bar higher to establish their union legally in court. Salamatou’s husband, in his affluence, organized a wedding for his 8th wife to reflect his social status. Salamatou had earlier rejected her union with him not only because he was 45 years her senior, but because she had a “fling” with another guy of her age. Not having a voice to choose her spouse, she stayed silent and watched her parents sell her off to the highest bidder

The couple had consummated their marriage without ever knowing each other’s previous medical report. Salamatou admits that though her husband wasn’t her first, she had undergone a virginal repair to make him feel like he deflowered her. It would have been a sacrilege for him to discover that she wasn’t a virgin. Hence, Salamatou had disclosed her deepest secret to her mum about her sexual activities whom after admonishing her, took her to an elderly woman in the community to “repair” her hymen. Such practices are common in this locality as women undergo virginal tightening to win the hearts and trust of their husbands.

Salamatou was contacted by the HIV-Free field agent during one of their outreach trips to Massagam. At four months pregnant, Salamatou was assisted with a free ANC consultation package which included HIV testing. She tested HIV positive.

At first, Salamatou did not understand what it meant to be HIV positive, she felt being HIV positive meant she was free from the virus. Understanding her level of education, the service provider used her vernacular to educate her on what HIV is all about, why she needed to take medication for life, the different modes of HIV transmission and the steps to take to protect her unborn baby from contracting the virus.

Conscious that adherence to treatment could prevent mother to child transmission of HIV which accounts for 8% of HIV transmission in Cameroon, Salamatou was ready to do anything to keep her baby safe. She started learning more about her health and how to avoid re-infection. Empowered, Salamatou decided to open up to her husband. “he was very furious and warned me never to bring the topic up again. He repudiated me once and told me it was out of pity he was keeping me, if not he will have just sent me off as he did to my co-wife. I was banned from leaving the house till further notice”

During her stay home, one of Salamatou’s co-wife visited her. It was the eldest of them all and she always looked up to her as a mother. Salamatou opened up to her. To her greatest dismay, her co-wife informed her that HIV was the cause of the saga that pushed their husband to utter the three letter words that pushed their co-wife to leave. Salamatou made the hard decision to escaped one night to Foumban, the divisional capital of Noun. Once in Foumban, she was harbored by a relative. Salamatou is convinced that she can better follow up with her treatment and ensure the health of her baby away from her husband.

While early marriages is en-vogue in the Noun, so is the rates of divorce/separations, it is estimated that over 40% of women married within the age of 13-20 end up as widows or separated/divorced in their 30s-40s. the quest of starting life anew, their impoverished background coupled with their limited knowledge on sexual education has increase the rate of unprotected sex with multiple partners amongst them, hence increase their exposure to HIV infection.

“Our moral values represent our culture and the importance of our culture lies in its close association with our way of living and thinking. Going contrary to this set of norms made me an outcast. Yet I’m ready to be that outcast if that is what it takes to have a healthy baby” Salamatou quipped.

According to the HIV-Free Project, the Noun harbors 20% of persons living with HIV in the Western Region of Cameroon with 70% being women, mostly of child bearing age. While many factors may account for these high numbers, the lapses of the culture of early marriages, and high rates of divorce, coupled with the low rate of sexual education are some key indicators that have favored the spread of HIV transmission among these beautiful people. If nothing is done, more girls would be infected with a ripple effect on the general population.