Bringing my daughter back to life

“When Belvaline my two-year-old daughter was born, she was bulky, beautiful and I could spend the whole day staring into her beautiful smiley face. She was growing at a normal pace, playing and making joyful noises whenever she saw me or her father. As Belvaline entered her sixth month of life this changed.” Kingceline Nkain, a 26-year-old mother of two explains.

Belvaline became sick and we took her to the Government hospital in Mbanga, Littoral Region where we were based. She was admitted and the doctors said she was suffering from yeast cells. After a week in the hospital, we were discharged and some drugs were prescribed. Back home, I realized Belvaline was losing appetite as she was no longer eager to breastfeed or eat the mashed food I had started giving her. She had an on-and-off high temperature, and kept losing weight. I was literally watching my daughter die bit by bit, though helpless, I wasn’t ready to give up so easily.

Hospitals became our constant home as we moved from one to the next. It was even more frustrating because we mostly ended up with the same diagnosis, yet our daughter was becoming a pale shadow of her former buoyant self.  After a few months, she had lost so much weight that you could count her protruding tiny ribs. We decided to relocate, thinking that the hot climate of Mbanga may be the reason for our daughter’s constant ill health and drastic weight loss.

We moved to Mutengene and started moving from one Hospital to the other again. Still no change. Tired both physically, emotionally and financially, I decided to stop everything. Rather, I thought of moving to my village so that my mother will help me when Belvaline will be crying throughout the night as she usually did, until the day she will pass away. I had started believing that my beloved daughter was not a normal child. I started believing that she was sent from the spirit world to torment me. I believed my daughter was doomed.

Hope knocked at my door when I least expected. A team from the CBC Health Services came to my house during a door-to-door sensitization and awareness campaign on health, nutrition, hygiene and sanitation. After examining my daughter, they told me she was suffering from severe malnutrition. I heaved a sigh of frustration wondering to myself what else could they say. My mind was made up to relocate to the village whenever I will have money for my transport fare. I was ready to bury my “burden” whenever she was ready to die and go.

In a way I can’t explain, they talked me into believing that all hope was not lost.  I stared into the eyes of my frail child and wondered if a miracle was still possible. Could my daughter be brought back to life? I started contemplating the idea of trying the last hospital. In her usual warm tone, the Field Worker, promised to walk with me each step of the way.

I spent some days at the Baptist Hospital Mutengene where the diagnosis of severe malnutrition was confirmed and the cause of her lack of appetite discovered. Treatment was administered. A few days after intensive treatment, I started seeing my daughter stretching her tiny hands to touch my face. A gesture that brought tears down my cheeks. It was evident each day that she was gaining a little weight and energy enough to smile, and ask for food. After one month, my daughter came back fully to life.

I don’t have words adequate enough to express my gratitude. The only thing I can do is to become an ambassador for this program. If I’m trained, I will counsel other women whose children are undergoing the same problem my daughter had not to lose hope. I will teach them how to recognize signs of malnutrition and what steps to take.

I’m forever indebted to the CBC Health Services for identifying my daughter, posing the right diagnosis, providing appropriate treatment and to UNICEF for providing the funds which helped in bringing my daughter back to life. 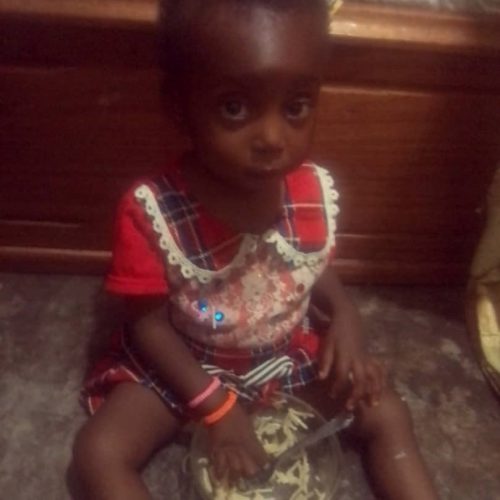 Ignorance almost cost me the life of my Child